Autism is what is known as a spectrum disorder. No two children are exactly alike, and some may be more or less profoundly affected than others. There are generally three main forms of autism spectrum disorder (ASD), though children can fall anywhere along the spectrum and many symptoms overlap.

Autism is a complex condition that impacts a child’s social interactions, behavior and interests, and communication skills. Parents often notice that their child is not developing at the same rate as their peers and may be delayed in speaking, resist making eye contact, have a sensitivity to touch or sound, or not react in a typical manner. They may repeat the same action, phrase, or behavior over and over again repeatedly. Children with a classic autism diagnosis tend to be more significantly impaired and are diagnosed at a young age.

Asperger’s syndrome is a milder form of autism where children tend to be higher functioning. They generally have normal or above-average intelligence and may be fixated on a single topic, wanting to know as much about it as they can. Although they are very smart, they still have impaired social skills and may have trouble holding conversations or figuring out how to respond appropriately. In addition, they may have coordination issues and appear awkward.

This is where many children fall on the spectrum, as pervasive developmental disorder (PDD) covers a broad range of symptoms. They are higher functioning than those with autistic disorder, but have more difficulties than those with Asperger’s syndrome. Children with PDD tend to have average language skills and may not demonstrate typical repetitive behaviors, but they still struggle with social interactions. PDD may not be diagnosed until children are slightly older and delayed development becomes more noticeable. 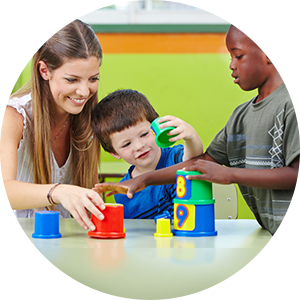 What are the Signs of Autism in Children?

Not every child displays the same signs of autism. Your child may exhibit some symptoms, but not others, which can make it more difficult to initially diagnose. Some of their difficulties may be common for their age, while others indicate autism spectrum disorder. Remember that all children are unique, so just because your child is identified at a certain level on the spectrum does not mean they won’t surpass your expectations and thrive. With early intervention and diverse therapies, they can maximize their potential. Even though your child has autism, they can still go on to live a happy and quality life with the right supports in place.

Diagnosing autism should be completed by a multidisciplinary team that includes a psychologist, educational diagnostician, speech and language pathologist, and occupational therapist. This provides a more well-rounded view of the child’s strengths and areas of need and looks at their behavior, communication, and social skills from multiple perspectives and within different settings. Recognizing signs that may indicate autism can help you to get your child evaluated early on and start implementing strategies to support their development.

Symptoms of Autism in Babies

Early detection of autism symptoms in babies can allow for early intervention of treatment and improved outcomes. While there is a wide range for typical development, follow your instincts. If you’re concerned that your baby is not progressing as they should and hitting key milestones, speak up and talk to your pediatrician. Some symptoms in babies include:

Symptoms of Autism in Toddlers

As babies transition into toddlers, symptoms of autism may become more noticeable. You may have had a gut feeling earlier on that something wasn’t right, but now more signs are emerging. Toddlers are at a stage where they should be becoming more engaged with the people and world around them, but children with autism spectrum disorder may have more difficulty connecting. In addition to previous symptoms, others may include:

Signs of Autism in Older Children

By the time children are older, the symptoms of autism are often more evident. Their actions and behaviors may differ more drastically from typically developing peers. Children with autism spectrum disorder may seem to be in their own world, uninterested in what is going on around them. There are many forms of treatment that can help children to interact more appropriately with their peers and improve communication and behavior. Signs of autism in older children may include:

What Causes Autism in Children?

There is no single cause of autism, so resist the urge to blame yourself and think that you did something wrong. Researchers believe that both genetics and environment contribute the development of autism spectrum disorders.

Some studies have shown that age of parents at conception, extreme prematurity and oxygen deprivation may all increase risk of ASD, but these factors alone will not cause it. Scientists have found more than 100 autism risk genes and a variety of genetic mutations that may contribute to ASD. But there is nothing you can do to guarantee your child will not develop autism. New research is taking place every day to better understand the causes and risk factors for autism.

Keep in mind that no two children are the same and they all develop differently. Just because you have one child with an autism spectrum disorder does not necessarily mean that your other children will have it as well.

Statistics for Children with Autism

According to the Centers for Disease Control and Prevention, autism affects approximately 1 in every 68 children in the United States. It tends to affect boys more frequently than girls with studies showing 1 in 42 boys and 1 in 189 girls are diagnosed with ASD. While the prevalence of autism has increased in recent years, this may be due to improvements in the ability to identify and diagnose this disorder, not necessarily that more children are developing it.

Get Autism Treatment for your Child Today

If you are concerned that your child may have an autism spectrum disorder, or they have been recently diagnosed, PediaPlex offers a wide range of services to meet their individual needs. From ABA therapy that focuses on behavior to speech therapy which can improve communication and social skills, comprehensive care is within your reach. PediaPlex is located in the Dallas/Fort Worth area with clinics in Fort Worth, Southlake, and Frisco, Texas.